At CES 2016, we met Patrick Sherwin, the founder of GoSun. The company was announcing a fascinating new solar stove that was built through inspiration from Patrick’s experience working with roofing. It uses solar directly to cook food in a tube, and can be used with 12-volt power for use at night or in bad weather. Since 2016, Patrick and GoSun have expanded their product line, staying focused on solar-powered products and the camping community.

This year, we are introduced to the current GoSun product lineup. It now includes nearly everything that regular campers could possibly want. The core of the product line is the power solutions. You can get small, portable solar panels in 10-watt and 30-watt options. You can use these solar panels to power many devices, but the most obvious is a power bank. Charging one of the GoSun banks, like the Power 144, allows you then power your devices and charge the bank at the same time.

One of the really intriguing product categories on offer was focused on water. These newer products have won a CES Innovation Award for 2021, which indicates a unique and useful product. In this case, you can get a solar-powered water purifier and pump, and a portable sink and shower that connect to the pump. The purifier is small enough to fit into a backpack, runs on solar, and can filter up to 99% of pathogens from water.

While the obvious target here is camping, it was hard for us to also focus on the usefulness in the event of natural disasters. This comes from much of the team living on the Gulf Coast and knowing what happens after a hurricane. The water filter would mean being able to trust the water we hoard in our bathtubs ahead of the storm, and possibly other water we receive after a storm.

The GoSun product line, which is wider than we have covered here, is available from the company’s website or on Amazon.

Interview by Christopher Jordan of The Talking Sound. For those of us in places like Florida, Texas, Nevada, Arizona, or Hawaii (where most of our CES team members have property), the idea of solar power is ubiquitous. You don’t really have to consider whether or not installing panels on your home or business will be productive or if the investment will ever be able to pay for itself. However, for those in other parts of the world, that is a real consideration. In order to help determine where solar will be a success, Absolar was created.

The company has created a fascinating system that combines two standard CES technologies, LiDAR and artificial intelligence, in a service that is not an autonomous vehicle or robot. Instead, they use massive yet detailed LiDAR scans of an entire city to map out the physical structure of an entire city. From that scan, they apply a machine learning algorithm in order to determine the surfaces on which solar panels will be the most productive and which will pay for themselves.

The technology was developed in conjunction with local governments in England in an attempt to reduce carbon output and non-renewable energy dependency. The LiDAR scans were made available by the government, and the data models were generated by Absolar. Together, they were able to map out a large number of buildings that could benefit from the installation of solar technology.

Even more interesting is that the technology is not limited to solar technology. With the scans and a new data model, they could identify other benefits, including green roofs, which is a trend that is starting to gain steam in the West. By training a new AI, new benefits can be achieved.

To learn more about Absolar or to find out how they can help your green initiatives, check out their website. When you’re installing solar water heaters and it’s time for lunch, you start getting ideas about how you can cook. GoSun Stove was created originally using the solar pipes installed on roofs and can cook a meal without anything other than the sun. The popularity for campers has created a problem, though: how do you feed a family?

This year the company has introduced a larger model which can cook 4 meals and even includes the ability to cook off of stored electricity, either wall or solar-based, for cooking at night. The new GoSun Grill is available for pre-order now for $599 with summer 2016 availability. Amid the bright lights of Las Vegas, SunPort offers a way for consumers to be much more energy conscience with how they use their devices.

SunPort is a tiny box that plugs into your outlet and measures the amount of energy that goes through it. That information is then tracked and matched with solar energy purchased from solar farms by usage. This allows for the application of solar energy without the need for installing panels or having sufficient land. SunPort director of information systems Nick Williams compared the method to depositing money into a bank and then withdrawing it from an ATM.

The device is portable, of course, meaning it can be used in any outlet so you can use your solar energy on the go. It can be preordered now and is expected to cost $80 per year for both the plug-in and the energy. Solar powered chargers and lights are not new, but when you do something valuable and helpful — that gets you noticed. That is what I liked about Wakka Wakka: the company is making solar products that help you along with helping people in 3rd world countries get power as well.

Wakka Wakka has on one end a solar panel that can charge the battery inside and give you over 40 hours of light. It can also charge devices if you need emergency power.

The device charges within 8 hours itself and is a perfect item for you boat, house or anywhere you need emergency power. The stand has a hole in it so you can set the charger on a bottle. That way you lift it off the window sill and get the solar device powered even faster.

Wakka Wakka also is helping in 3rd world countries that do not have a standard power grid. By powering these devices in the sun, they can charge their systems to make the day go faster. They also have lights for nighttime travel.

Best part is they are developing a full home emergency kit. The device is not released yet — you’ll have to watch the video for more information. In the meantime, go to www.getwakawaka.com for product lines.

Interview by Jeffrey Powers of Geekazine E-ink technology offers an easy-on-the-eyes lightweight reading experience with the Amazon Kindle. But if you are looking for a way to protect that screen, and make sure that your Kindle never runs out of power, this is the product for you!

Plus, with the built in light, you can read in areas without good illumination (like on long flights) or while your sleeping partner enjoys an early bedtime.

Interview by Andy McCaskey of SDRNews for the TechPodcast Network.

IPowerUp provides an entire series of cases, combining protective case with USB charging also adds a 1700mah battery – effectively doubling the range adding 6-8 hours of use time. Other models offer pockets for drivers license or credit card, or FM modulator that automatically selects an unused channel in home or auto. Charge status is displayed directly on most models, as well as integrated solar charging to allow the device to recharge indoors or out, adding about 17 minutes of talk time for every hour in the sun.

iPowerUp also makes a Bluetooth audio amplifier and a DLP Micro-Projector that also has charging capabilities.

Interview by Andy McCaskey and Courtney Wallin of SDRNews for the TechPodcast Network. 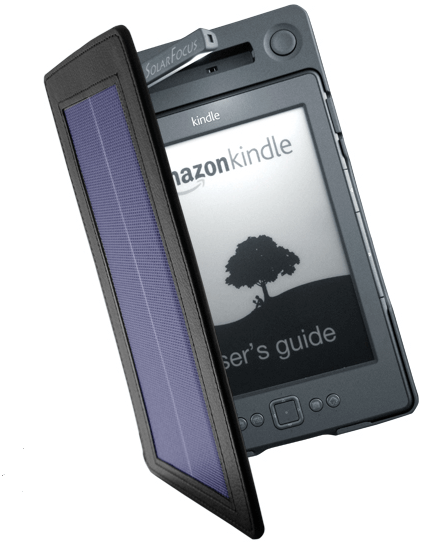 These days many of us own the Amazon Kindle, and unfortunately many have found out just how fragile the device can be. Solarmio, who recently won an Innovation Award at the Consumer Electronics Show in Las Vegas, has some solutions to protect your favorite e-reader. The new Solarmio Kindle case will not only protect the device, but it has a few other handy features like a light for nighttime reading with a separate battery to power it for up to 50 hours. The case not only can be charged by a standard USB cable, but also has a solar panel cover that can keep it charged as well.

The Solarmio cover is available now for $79.99. You can see a full demonstration in the video below, as well as find out more by visiting Solarmio on the web, where you can also purchase this cool case for your Kindle.

Want to recreate the scene from High Fidelity, but don’t have an oversized boom box or 16 D- Batteries it takes to run it? Well that is where Eton steps in. They can not only convert your iPod or iPhone into a full size boombox, but also will help with charging, as this is also a solar powered device.

Eton has some great charging solar solutions. The SoulRa XL has a commercial grade solar panel and has a level of water resistance to protect from elements. Indoor or outdoor, you can create 5 hours charging. But of course, it makes for a great charger if in a pinch.

Green was another big theme again at CES 2011 and GoalZero had a full line of portable recharging products. I have often been skeptical of these types of devices but it is obvious that GoalZero know what they are doing and use a very logical approach to their entire product line. If you want something that will simply charge a phone, or something that will keep a light on all night or charge a laptop they have it and it will scale.

Combining battery storage with solar technology is a great combination and the prices are such that any outdoor person would consider picking up some of their solutions. This is the portable solar powered charging solution that I can endorse without reservation!

These Sponsors made CES 2011 coverage possible your support of them is appreciated!