If you are learning how to DJ nowadays, you begin by putting your library onto an iPod. Stanton (by Gibson) understands that concept and has developed a device to help use that iPod in a portable player. The SCS.4DJ is a system that can get you set up for mixing music without extra equipment (besides a P.A.).

Stanton SCS.4DJ is a UNIX OS with proprietary software installed. You have two mixing units to prep songs. Additionally you have USB ports in all places to insert USB hard drives, iPods and all other drives that use USB.

Add your library into the SCS.4DJ to start mixing music right away. www.stantonDJ.com 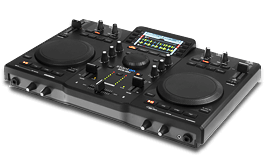 If you’re a DJ, you probably know the name Stanton, purveyors of DJ hardware. If you’re not a DJ, you probably still know the parent company, Gibson, of the guitar fame. Either way, we’re in good company here. Todd and Steve mix it up with Darrin “B-Side” Young from Stanton.

On show is Stanton’s SCS.4DJ Digital DJ Mixstation, a self-contained digital controller that has its own built-in computer and mixing software. The Mixstation is Linux-based with proprietary software that takes advantage of the unit’s features.

The music itself is all digital (.mp3, .wav, .aac) and USB storage can either be plugged in temporarily or else more permanently fitted on the underside in media bays.

Some of the cool toys include a 4″ hi-res colour LCD screen, display of the current track’s beat and wave form, media browser and automatic synchronisation between tracks (beat match). There’s also an auto DJ feature that takes a playlist and beat matches between the tracks. Nice.

Available now for $499 from over 500 retailers nationwide.

Interview by Todd “TC” Cochrane of Geek News Central for the TechPodcast Network, and Steve “Surfer” Lee of Waves of Tech.