With wifi routers and access points, there’s a subtle game of one-upmanship based on the number of aerials sprouting from the device. If unit has only one aerial or it’s embedded in the unit, it probably comes free from the broadband or cable provider; two aerials is soooo 11g, three aerials and the router’s got some chops; six aerials….now you’re getting serious. Todd gets up to speed with the AC3200 Ultra Wi-Fi router from Daniel Kelley, VP at D-Link.

The AC3200 is a serious piece of kit. To start with, it looks like something straight out of a sci-film, a red stealth fighter fully armed with six laser cannon. And while the laser cannon are really aerials, you get the point – it means business. The AC3200 is a tri-band router using one set of frequencies in the 2.4 GHz range and two sets in the 5 GHz. It intelligently assesses the bandwidth and QoS (Quality of Service) demands of the connecting devices and allocates them to the most appropriate channels, and if necessary, can aggregate all three bands giving a maximum theoretical transfer rate of 3.2 Gb/s. No matter that the actual data rate will be much lower, it’s still screaming fast.

Additionally, the AC3200 uses beam-forming technology to focus the wifi signal to where it’s needed, rather than transmitting uniformly everywhere. On the wired side, there are four gigabit ethernet ports and two USB ports (one USB3, one USB2) for connecting up storage (DLNA server built-in) or printers. The AC3200 can be the hub of a connected home. 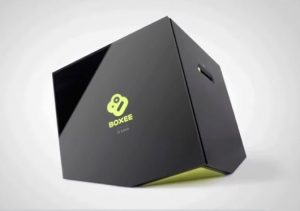 A quick look at the D-Link Boxee Box, a premium quality set top box for OTT Over the Top Video, along with the Boxee remote, which features a keyboard on the reverse side, for quick entry of web sites or configuration.  With consumer friendly appearance and packaging, the Boxee software – already a favorite with tech enthusiasts, gets some premium level packaging and design.