Writing is one of humankind’s greatest inventions and it’s no surprise that despite the arrival of typewriters, keyboards, mice and voice recognition, most people just write stuff down in notebooks or on bits of paper. That doesn’t easily transfer into a digital record but Livescribe reckon that they have a solution to this problem with their digital pens. Todd takes notes with Brian Kemp.

Livescribe have a long history in this space, and their latest digital pen, the Livescribe 3, continues the tradition. Using specially printed notebooks, a tiny camera installed in the pen tracks the path of the pen across the page, converting the motion into handwriting that is then transferred to a nearby Apple iPad or iPhone using Bluetooth.

Once the writing is in the iPad app, you can then starting doing clever things, such as adding contacts to your address book or dialling phone numbers. An Android version is expected later in the year.

The Livescribe 3 is available now for $150 with notebooks retailing at around $25 for a pack of 4. The price of paper products varies depending on size and style.

Switch Lighting was the winner of CES Innovation Award for Design and Engineering Award a CES 2013 for their latest LED three-way bulb,

What makes the Switch bulbs special is that they are filled with liquid silicon. This helps to keep them cooler than most LED bulbs. Because they are cooler the Switch lighting bulbs can be used in places that other LED bulbs can not like enclosed areas. Switch bulbs work like an incandescent light bulb, they are dimmable and spread the light out broadly. The newest bulb that won the award is the first three-way LED bulb.

Switch is based in California.

Their bulbs range from $40.00-$60.00 and are available through speciality retail store. Their bulbs should last up to twenty-five years and are recyclable. At this time Switch Lighting mainly sells to businesses and government organizations.

Interview by Jeffrey Powers of Geekazine and by Scott Ertz of F5 Live.

Omnimount the maker of ergonomic furniture is now making ergonomic TV mounts. The Omnimount mount for TVs allows a television to be moved easily up, down, forward and backward. If you are sitting on the floor you can lower the TV so that you are not craning your neck to watch it. The mount is also extendable so you can bring the TV closer to you. The mount can be extended out up to 28 inches. These mounts would be perfect for people who want to mount their television sets over their fireplace. The problem with this idea is that it leads to the viewer having to look up to watch it which is uncomfortable and unhealthy. With the Omnimount mount you can still place the TV over the fire-place and then bring it down when you want to watch it.

The mounts can handle monitors up to seventy pounds and come in various sizes. Mounts that handle smaller TV monitors are available now and those that can handle bigger monitors should be available soon at an MSRP of $449.00.

Interview by Jeffrey Powers of Geekazine.

Griffin Technology showed off two items at CES 2014. The PowerMate Bluetooth and the Merchant Square Case .

Luiqipel, as the name implies, is the company who waterproofs your phone. But now it has taken things a bit further, attempting to prevent other damage as well.

Impacts? Screen scratches? Those are two areas the company is focusing upon. The latest technology is a think film that may look like it’s close to nothing, but actually provides the damage control that customers are looking for, both from drops and encounters with keys in pocket or purse. The company claims that a screen can survive a four foot drop of a steel ball upon it. There’s a demo of the latest product, and you’ll need to watch the video below to get a look. You can visit Liquipel to learn more.

Kiwi Wearables is wearable technology that can be clipped on or worn on the wrist. It works with both bluetooth and wi-fi. The device can interact with both your phone and connected devices within your home network. It has motion, temperature, magnetic and barometer sensors. The Kiwi Wearable also includes a microphone which listens to the environment around the users. The users can also use the microphone to issue commands. You can also issue commands using custom designed gestures. In the video on the website, the user writes an S in mid-air and brings up her Shazam app to identify the song playing over the loud-speaker. The device is not waterproof, but it is something that they are working on. The API is open to developers. The Kiwi Wearable will come in white, silver and black and should be shipping in July. It will be $125 plus shipping. I have to say I am really curious about this device and I am thinking about preordering one. I only hope that it works as advertise

Elmo USA which has been around in the United States since 1973 and in Japan since 1921, offered two new products at CES 2014. The Qbic-MS1 a wearable action camera and the Elmo BOXi T-200 Projector.

The Qbic-MS1 is a wearable camera which can be used to take both videos and photos. It has a standard mount and can use most action camera tripods on the market. It has a wide-angle lens and can take pictures at 120, 145 and 170 degrees. It is WiFi enabled and connects to a free app which will be available in the iTunes app store upon release. An Android app is currently being worked on . You can watch live videos from the camera through the app. You can also control the camera using the app. The Qbic-MS1 will last two hours on a fully charged battery. It uses a micro SD card to store the content. It should be available in spring 2014 for between $200-$300, price is yet to be established. 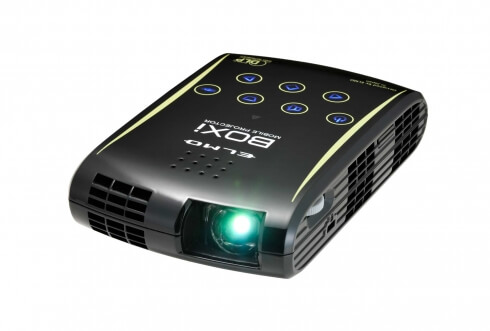 The Elmo BOXi T200 is a light and compact mobile projector. It is 3.7 inches x 6.0 inches by 1.4 inches and weights only 0.6 lb.. It produces 1080 resolution. You can project a 50 inch image with only three feet of room. The Elmo BOXi T200 has HDMI input, and audio output. You can also listen to audio directly from the device. The device is available on the website for $429. 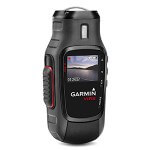 Garmin are well known for their satnavs and GPS-based devices but a new range of wearable action cameras were announced at this year’s CES. Todd chats to Maddy about the new cams.

Garmin’s range of action cameras are 1080p HD video cameras in a ruggedised and waterproof (IPX7) case, with a built-in 1.4″ display and around 3 hours of recording time. There’s full range of accessories and the VIRB camera comes with an industry mounts compatible adaptor so existing gear can be potentially re-used.

Todd takes a look at Ford’s C-Max Solar Energi concept car, which amongst other things, features a solar panel roof that uses a special light concentrator lens similar to a magnifying glass to improve the efficiency of the photovoltaic cells. Ford reckons that a day’s worth of sunshine is enough to charge the hybrid’s battery, which is good for 21 electric-only miles.

This is good news for the environment as it would reduce yearly carbon dioxide (CO2) and other greenhouse gas emissions from the average US car by as much as four metric tons – the equivalent of what a American house produces in four months. This probably assumes a perfect sunshine record and maximum electric mileage each day, but, hey, every little bit helps.

Review by Todd Cochrane of Geek News Central for the TechPodcast Network.

Don looks through the peephole with Chris Adams from Brinno at their latest home security cameras. Brinno are known for their time-lapse and motion detecting digital cameras and this is the latest addition to their PeepHole Viewer range.

The PeepHole Viewer digital camera is designed to fit over standard door peepholes to record activity on the outside of the door, either as short videos or else as still photos on a micro SD card. Connecting the camera to the peephole is very straightforward and a new peephole is included with the camera just in case the existing peephole is damaged or dirty. Footage can be reviewed on the camera itself or else transferred to a laptop or PC using the memory card to look at visitors in more detail.