You might think that a switch flip is a skateboard move but in this case Switchflip lets you control new power outlets from a wall switch with no extra wiring. Todd gets a demo from Ryan on maximising those hard-to-reach sockets. 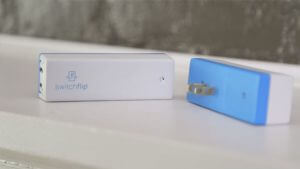 The Switchflip uses its own wireless connection so there’s no Bluetooth or WiFi connectivity to mess around with. It’s plug’n’play, or as Switchflip says, “Simple is smart”. Range is up to 100ft, depending construction.

The crowdfunding is going well, with the Switchflip currently over 200% funded with a month to go. There are still a few Early Bird Specials to available, and US$35 will get a transmitter and a receiver. Delivery is expected in October 2017.