Don Bain and Todd Cochrane inteviewed Zac Sutton of iSmartAlarm about their home security system, called CubeOne, at the broadcast booth for CES 2014.

The iSmartAlarm system plugs into your router and all of the remote sensors communicate with the CubeOne box which syncs with the cloud and an iOS (or Android) app to give you a security system that is infinitely customizable. Sensors and controls that can be hooked to the system include Remote Switches, Streaming Cameras, Door and Window Sensors, and motion sensors. The system can be controlled by a web interface, App or a remote control. 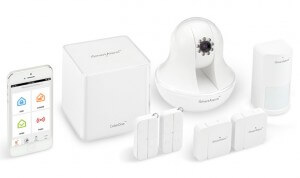 Interview by Todd Cochrane of Geek News Central for the TechPodcast Network and Don Baine, the Gadget Professor.