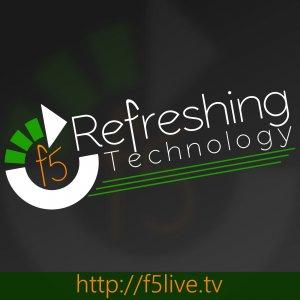 Hosted by Scott Ertz and Avram Piltch, F5 Live is a livecast covering the worlds of gadgets, gaming, Internet and media.

This week, Steam is leaving the orchard, Bezos is headed to Congress, and Universal is not invited to the AMC party.

This week, Nintendo's giving up the details, Messenger is giving new ways to connect, and AT&T is giving away customers.

This week, Big Tech wants to know who you see, Libra is trying to stay alive, and Bad Robot is coming back to television.

This week, Sprint is gone for good, Humvees are here to stay, and the Apple Tax has been temporarily suspended.

This week, some Philips Hue Bridges are going dark, online stores are banning products, and 5G is limiting television.

This week, AMD's coming to a PC near you, Clearview AI is spying on your face, and ViacomCBS wants to compete with itself.

This week, Apple's playing fast and loose with privacy, Fortnite is invading schools, and Google's hiding the favorites.

This week, Huawei is leaving networks, Half-Life is coming to VR, and Apple is temporarily skipping theaters.

This week, Google has given up its Daydream, Blizzard is giving up their loyalty, and tech companies may no longer give up your data.

This week, Apple's phones can be broken, Microsoft's streaming can be tested, and Google's news results can't be previewed.

This week, Uber's fighting off pressure, EA's testing under stress, and Vudu's hiding from bad words.

This week, Apple's trying to dodge bugs, Nintendo's embracing their past, and Facebook's giving out your number.

This week, Apple is fighting the EU, Ninja is fighting for his brand, and CBS and Viacom are trying to fight Disney.

This week, Android is better friends with Windows, loot boxes are lesser friends with the industry, and YouTube is "special friends" with top creators.

This week, Google has a new Play Pass, Microsoft has a new Ninja, and broadcast TV has a new enemy.

This week, Russia wants your face, Google has canceled censorship, and Netflix is leaning into Originals.

This week, Apple's got a new design direction, Switch Online might have an expanded game collection, and privacy has a new antagonist in the government.

This week, Apple announces a cheese grater, India tries to ban cryptocurrencies, and DirecTV might be on the chopping block.

This week, facial recognition goes to school, Xbox goes to the competition, and iTunes goes out to pasture.

This week, Samsung's postponing its launch, PC gamers are switching platforms, and Sinemia is leaving the country.

This week, Apple's lowering their price, Microsoft's raising their benefits, and Google's shrinking their offerings.

This week, Philadelphia is staying in the present, EA is skipping their presentation, and Disney is releasing their past.

This week, Thunderbolt endangers computers, Sony eliminates free games on the PS3, and the internet enhances a hoax.

This week, Nest is listening to your input, Epic Games is talking to a convention, and YouTube is changing what they show you.

This week, Sprint wants AT&T to tell the truth, Microsoft wants everyone to use Xbox Live, and Disney wants to shows you other content.

This week, your privacy is guaranteed again, your security is at risk again, and NBCUniversal wants your money again.

This week, Apple's quality control is folding, the Xbox One is closer to a PC, and T-Mobile isn't ready to hijack your TV just yet.

This week, China's phones are looking for a home, Valve has found a new competitor, and the internet is having a change of heart.

This week, Samsung wants all your cash, Sony wants a way out, and China wants a virtual anchorman.

This week, Apple is expressing multiple personalities, Nintendo is expressing their love for the 3DS, and Netflix is showing some love for movie theaters.

This week, karaoke is coming to Twitch, no information is coming from Apple, and some big names are not coming to the big screen.

This week, Apple says they haven't been hacked, Google says it's fixed a privacy violation, and Netflix says the EU is trying to limit content.

This week, Facebook wants to watch you cook, Microsoft wants to help you game, and WarnerMedia wants to stream its own content.

This week, Apple wasn't completely honest in their presentation, Nintendo isn't completely in sync with their customers and Netflix wants to recommend a complete solution for producers.

This week, Sprint and T-Mobile are finally coming together, Sony is keeping PlayStation apart, and the Federal Trade Commission might be going down a familiar road.

This week, Apple reveals their private thoughts, Valve reveals they're cloning again and Amazon reveals it wants to expand its media reach.