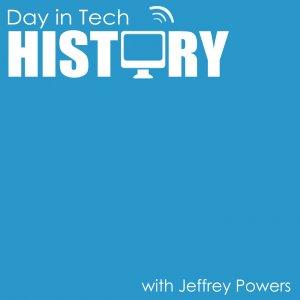 1984 Apple announced they would split up the Cupertino based company into three divisions Apple II (handling all Apple III computers as well), the Apple 32 division (Lisa, and new Macintosh line o

Gateway computer makes a bold move and purchases rival eMachines for 50 million shares of Gateway common stock and $30 million in cash. eMachines was a company founded by Lap Shun Hui along with South Korean companies Korea Data Systems, and TriGem.

Google owned Motorola Mobility for only 2 years before deciding to sell it off. They chose to sell to Lenovo for $2.91 billion. A major change in the $12.5 billion acquisition they made in 2011. But of course that was after Google striped the company d...

2006 Grand Theft Auto: San Andreas was a game that changed perception of the industry. The grit and cruelty of the GTA franchise has not only brought controversy, its also brought the fans. One bit

1896 Although he was not the only person to be working on the technology and not the first X-ray,Wilhelm Roentgen gave the first public lecture and demonstration of his device. He photographed Dr.

January 22, 1998: Microsoft and US Department of Justice

1998 Microsoft reached an agreement with the US Department of Justice regarding Internet Explorer on Windows 95. In the agreement, computer manufacturers could have the IE link removed. This was a s

1981 – While getting this up to 88 miles per hour doesn’t take you back in time, it was still a cool car to have. The First production Delorean DMC-12 was built. A prototype was made back in 1976 and all Deloreans were made in Ireland. 9,

1885 – Sounding like anything but a roller coaster, the Gravity Pleasure Switchback Railway was the first American designed amusement coaster designed by LaMarcus Adna Thompson. Only 5 cents to ride, the Switchback was a simple coaster that took you ab...

Happy Birthday to me. 1983 – at an introductory price of $9995, Apple introduces the Lisa computer – the first computer with a GUI (Graphical User Interface). The computer featured a 5 MHz 68000 microprocessor, 1 MB RAM, 12″ monochrome monitor,

1983 – During the CP/M Show, Franklin Electronic Publichers revealed the Franklin Ace 1200 computer. The main feature of this computer (like the other Franklin computers before) was the fact they copied Apple’s ROM and operating system code.

2012 – Yahoo! had some turbulent times from 2007 when founder Jerry Yang was CEO. Of course the big debacle being the Microsoft bid, which took over 9 months to settle with Carl Icahn being a major instigator.

1956 – The U.S. Semi Automatic Ground Environment (SAGE) was disclosed to the public. SAGE is a computer that connected hundreds of radar stations in the US and Canada as a one-stop monitoring of the sky. SAGE was commissioned and developed by MIT.

1990 – AT&T suffers the oddest outage nationwide. A switch in New York crashed, then rebooted. This caused the other switches linked to the New York switch to also reboot. The cascade continued on until all 114 switches were rebooting on 6 second inter...

1973 – Elvis is broadcast via satellite to over 1 billion viewers in over 40 countries. That is, except for the U.S. because Superbowl VII was being played. The U.S. finally got to see the concert on April 4, 1973 on NBC. The show,

2000 – Microsoft CEO Bill Gates announces he will be stepping down from his role but remain on the Board and embrace a new role as Chief software architect. Steve Ballmer will take over the CEO role and also remain president. Love him or hate him,

1966 – Bruce Wayne and Dick Grayson entered our lives via ABC on Wednesdays. The television series “Batman” debuted with the episode Hi Diddle Riddle. Each half hour episode contained either part 1 or part 2 of the dynamic duo’s fight against the crimi...

1996 – Texas Instruments announced it would release the TI-83 and became one of the most popular calculators. The TI-83 had many graphing modes including polar, parametric, sequence and function graphs. It could also run statistics,

At MacWorld 2001, Steve Jobs announced Mac OSX – the base OS for Apple for the next couple decades. With Darwin, an open source BSD Unix service, 2D (Quartz), 3D (OpenGL) and Quicktime (QT5). The programming language of Classic,

1940 – a full-scale relay calculator designed by Bell Labs engineer Dr. George Stibitz, becomes operational. The machine was first designed in February 1938, and construction began in April, 1939. Although the device was ready by October, 1939,

Born in 1856, Nikola Tesla was the inventor of alternating current. Tesla even worked for Edison from 1882 to 1886. He then started the Tesla Electric Light & Manufacturing company in where he worked more on AC electricity.

2001– It was CES where Microsoft unveiled the XBox video game system. The system had a 733 MHz processor, hard drive and 250MHz graphics processor. The console didn’t release until November 15, 2001. XBox was the first American gaming system since the ...

1984 – Richard Stallman quit his job at MIT to begin the writing of GNU software. GNU – a recursive acronym for “Not Unix” and reference to the song “the Gnu” – is an operating system that is compatible with Unix software.

1904– To show the effects of how dangerous Nikolai Tesla’s Alternating current was, Thomas Alva Edison filmed the electrocution of the elephant, Topsy. This was falsely advertised as the first Elephant to be born in America by the Forepaugh Circus.

1977 – Steve Jobs and Steve Wozniak officially incorporate the Apple Computer Corporation. Mike Makkula jr. invests $250,000 in venture capital and becomes the first chairman of Apple. They also decided to move operations of the company outside of Stev...

1975 – Bill Gates and Paul Allen write a letter to the Micro Instrumentation and Telemetry System (MITS) stating they have BASIC language for the Intel 8080 processor and would like to incorporate on the Altair computer in exchange for royalty payments...

Happy New Year! 1994 – It was a 6 year office romance that ended in marriage. Best part – where we hear marriages dissolve, this one has continued on for over 20 years. So we wish Bill and Melinda (French) Gates a happy and joyous wedding anniversary.

On this day, we basically crunch numbers. This is where you will see companies let you know how much of their products are out there. How many copies of Windows have been sold, how many PC‘s were bought – how much shareware has been downloaded.

2008 – Facebook made an initiative to remove any picture showing breastfeeding. In return, 11,000 women posted pictures in protest. On June 15, 2014, after the #FreeTheNipple campaign brought success, Facebook officially changed their stance on the sub...

2004 – Once Commodore dropped from the market in the 80’s, it pretty much started bouncing around the world from company to company. Ultimately it landed in the lap of  KMOS – a Deleware company. However, on this day,

1995 – Compuserve blocks access to over 200 sites that have explicit content. They do it to avoid issue with the German Government. The sites would be blocked until Feb 13, 1996 when all but 5 sites were restored.

2001 – Yahoo announces that they will acquire 98.6 percent of the outstanding stock to Sun Microsystems discontinues

2007 – With iTunes just signing a deal with FOX and their content for iTunes, stocks pushed upward to $200 a share. It was the first time Apple hit that barrier, and promptly dropped after. The company has been up and down,

1998 – during the last couple years of the 20th century, the race was on to fix an oversight in multiple computer systems. The problem was dubbed “Y2K” or the Millennium bug. Bottom line was that all computers worked on a 2 digit year system instead of...

December 24: Watch out for Werewolves

An interesting fact: Russian folklore believed that December 24th was the day people could be turned into Werewolves. Any child that is born on December 24th would be considered a werewolf. There are many ways to detect a werewolf – bristles under the ...

2008 – Santa Claus is spotted on Google Earth. Of course the story of St. Nicholas is an interesting one that doesn’t really involve religion. But now we know where he resides, thanks to Google! Of course, watching Santa’s route is big for children,

1845 – Today, we’re travelling to the Geek side of things. It’s not everyday that I get to talk about my other passion – Music. The Euphonium – often mistaken for a Tuba – was created. It was also coined in later years as “P.T. Barnums’ Euphonium.

2000 – President Bill Clinton signs the Child Internet Protection Act into law. The law is implemented to set rules for the web to expose them to pornography and sexual content. In 2003 the law will be challenged, but will be upheld.

1996 – Steve Jobs started Apple. When he left Apple, he started NeXT. When Apple started to fall, Steve Jobs came back. Of course, having 2 computer companies is not a good idea – So why not buy it out?That is what Apple did. In a $400 Million deal,

1974 – Micro Instrumentation and Telemetry Systems (MITS) puts out the first ever “Do it yourself” Altair 8800. You would get it through Popular Mechanics Magazine, then assemble it yourself. This is a turning point in home computer setup.

1926 – The term “Photon” is coined. Of course a photon is the basic “unit” of light and all other forms of electromagnetic radiation. Newton Lewis is the one who coins the term. HTML 4.0 is published .au goes back to auDA Dan Hesse becomes CEO of Sprint.

1989 – The first full episode of the Simpsons airs on FOX TV network. 21 years and 1 movie later, the show still continues on strong. The cast stayed pretty much the same since 89. The Simpsons started on FOX as an animated short on the Tracy Ullman Sh...

1994 – Although its only been in mainstream news for a couple years, the Large Hadron Collider has actually been around for many years now. On this day, for example, MacWorld

1995 – At the turn of the Internet age, researchers at Digital Equipment Corporation, led by Paul Flaherty, Louis Monier and Michael Burrows, created a web crawler and indexer algorithm. The web program was launched on December 15th and called “AltaVis...

1982 – After a decent success of the Atari 400/800 line the company noticed the console was looking a little “old”. After all, the Atari 400 actually discolors upon UV light. The 400’s non-tactile keyboard was replaced with the 800’s raised key keyboar...