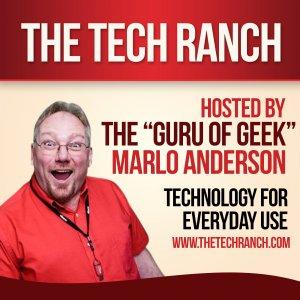 
By The Tech Ranch

Guest Host Rockin’ Dave Blair and Producer Extraordinaire Jim Walsh take you on a winding road. The conversation starts with Dave and Jim chatting about Artificial Intelligence. Next up is Paul Ferron with LibertyID.

MORE THAN THE MOON

The “Guru of Geek” Marlo Anderson is back in the studio with “Tech Geezer” Jim Walsh. After weeks of buildup towards the 50th anniversary of the moon landing it’s finally here. When people hear NASA, they are quick to think of trips to space and space ...

Rockin’ Dave Blair is in the saddle today with “Tech Geezer” Jim Walsh. Dave brought with him a mixed bag of guests. Listen in to hear from leaders in the manufacturing, cybersecurity, and cement industries.

Have you ever thought about what it would be like growing up surrounded by technology or the opposite for our younger listeners? “The Guru of Geek” Marlo Anderson and “Tech Geezer” Jim Walsh are joined by Aaron Riopelle, a high school senior.

Do you wish you would have invested in Apple, Google, or another billion dollar company before they hit it big? Well, so did we, but it’s safe to say that ship has sailed. Lucky for you the world of technology is bringing a whole new armada of opportun...

THE LAW AND TECHNOLOGY

With The Guru of Geek Marlo Anderson on the move again, it’s up to Beth Schatz Kaylor and Tech Geezer Jim Walsh to guide you through this week’s episode of The Tech Ranch. Beth and Jim are joined by guest Lynn Wanner of the Bismarck Police Department.

Looking to make some extra cash? Turns out a lot of people are. More and more people are turning to temporary employment such as Lyft and Uber to help pay the bills. Today on The Tech Ranch the Guru of Geek and the Tech Geezer explain the emergence of ...

TECH IN THE WORKPLACE

The Guru of Geek Marlo Anderson returns from his travels to discuss tech at work. Joining him are Tech Geezer Jim Walsh and special guest Bill Dean from Alliance Real Estate. Together, they look at how to leverage technology to benefit the workplace.

CHANGES IN THE ENTERTAINMENT INDUSTRY

Production companies like Sony Pictures are turning to online “story-telling” services for content. Hear from The Guru of Geek Marlo Anderson and Tech Geezer Jim Walsh, how sites like Wattpad are changing the way writers share their ideas.

What are Hummingbird, Rankbrain, and Smart Bots anyway? Is it possible to actually use an algorithm to improve functions on websites such as Google. Today, The Tech Ranch explores what these strange-named string of “things” are and how they help.

Do NOT Call Not answering your phone seems to be the new thing. Screening calls and that seems to be frustrating more and more people. Companies like Ooma have created a black list to stop the calls from coming through. However,

COMMON DENOMINATOR OF AI WITH GOOGLE AND MICROSOFT

What does our future show about artificial intelligence (AI)? Are we going to be replaced in the workforce? The Guru of Geek Marlo Anderson, Tech Geezer Jim Walsh and special guest Mike Seminary discuss their thoughts about how AI is impacting us now.

THE ELEMENTS OF ELECTRONICS

Have you wondered what is exactly in your smartphone? Not the apps, photos or videos, but precisely what elements are used to physically make the device? Today, the Guru of Geek Marlo Anderson discusses with Snoop Doug and The Geezer the interesting el...

Technology has never been easier to monitor exercise routines and healthy diet plans. If you love technology and love to maintain a healthy lifestyle, this show is for you! According to IT consulting experts,

The technology of the past along the Missouri River.

So what do North Dakota and technology have in common? For some, looking at Google maps is the first step to locate North Dakota. For others, like the Guru of Geek Marlo Anderson, it’s an exciting time in his home state.

Evan and Ganya Anderson, Gizomonics LLC, are host for Guru of Geek Marlo Anderson today. The guest duo discusses their travels to see the latest SpaceX launch. SpaceX is making history with the unique ability to be reused for space exploration.

Memory for our devices is changing every day. We now have the ability to purchase 1 TB of memory on a mini SD card. Furthermore, the speed of these storage devices is moving at a significantly faster. Imagine information being transferred at 1 GIG a se...

In this episode of The Tech Ranch, the Guru of Geek Marlo Anderson had every the intention of having App Wars. However, like all things in the Guru of Geeks life (and mind), things tend to happen NOT according to plan.

Apple introduced the world to Apps in 2008. Since then, Apps have evolved and become a part of our every day lives. there are billions of Apps that are available for people to download, ranging from games to personal virtual assistance.

Tech Geezer remembers talking through a Dixie cup with a piece of thread. Can we assume remembering life before WiFi should be easy enough for the old Geezer? According to tech sources like Eatel business, wireless Internet is always making changes.

Apps that change the way we live, work and play. There is an app for everything ranging from podcast apps, weather apps, social media apps, health apps and game apps. Today, the Guru of Geek Marlo Anderson talks about some useful apps,

You might not know this, but there is a sweet spot for when to buy airline tickets. In the past 20 years making travel arrangements and purchasing airline tickets have changed significantly. It used to be you could walk up to the counter and purchase a...

The Do’s and Don’ts of using Tech While Traveling

Segment 1: Using Tech to save money on Travel. Segment 2: What days are best to purchase items on the Intenet including travel. Segment 3: How to protect yourself from hackers who prey on travelers. You can look into a managed WAF solution to avoid you...

So Many Questions and 1 Hour to Answer Them

We have so many questions about technology as our knowledge advances. The Guru of Geek Marlo Anderson, Rockin’ Dave Blair and Tech Geezer Jim Walsh spend the show trying to find answers to their own questions.

Explaining the Unique Use of Crowd Funding

Happy 5th Anniversary to Tech Geezer Jim Walsh. It’s been 5 years since sitting down at the mic and helping The Tech Ranch become a success! Your input, opinions, ideas and sharing your thoughts have played a crucial role in reaching out to listeners.

Creepy Electronic Features That Will Make You Cringe

We are back in the twilight zone on this episode of scary technology. What would you do if we told you cell-sized robots are being mass produced. The laws of physics say that some inventions are not possible. Students at MIT are proving different.

There are many ways to utilize products other than their intended purpose. This show will discuss what those options can be and who is leading the way in re-purposing unused products. Dave Blair is in for the Guru of Geek this week,

What in the App is this About?

If you use the word PASSWORD, that’s about to end. New technology to detect potential heart attacks is on the horizon. California decided to pass legislation to stop the use of the word “password” or “admin” as a default passwords.

The Unlimited Future Potential of Drones

Most people think of drones as another hobby. However, to people like the Guru of Geek Marlo Anderson, drones are more than that. Drones present a future of unlimited possibilities. The delivery of goods and services,

Guru of Geek Marlo Anderson is out on business for National Day Calendar. Filling in today is Rockin’ Dave Blair and Tech Geezer Jim Walsh. It’s never too late to start your Christmas shopping. Dave and Jim want to help you get an early start with gift...

A Geek, A Legend, An Inventor

The Guru of Geek is back on the air with two very special guests! Legendary Astronaut Steve Swanson is in studio with the Guru of Geek! Steve talks about his 10 year career, including 195 days in space and 5 space walks.

What are they going to put in vending machines in the future!

The go-to for late night snacks, beverages when you are thirsty or a set of earbuds in an airport, the vending machine is entering the age of hi-tech.  In-studio guests Lexi Preszler and Deb Eslinger from the Center for Technology and Busin...

APPLE AND ANDROID SQUARE OFF

VIDEO COMMUNICATION PLATFORMS One of all the biggest challenges we face with our smart device is video communication across the platforms. For example, Facetime is a proprietary app for iOS users. Android users can not make video calls via Facetime wit...

ADVENTURES WITH AIRBNB A‌i‌r‌b‌n‌b‌,‌ ‌I‌n‌c‌.‌ is a company based in San Francisco that operates an online marketplace and hospitality service for people to lease or rent short-term lodging from holiday cottages to hostel beds.

AUTONOMOUS RACING One could be forgiven for thinking that Tesla is the only company in existence building autonomous, or self-driving, electric vehicles. The Elon Musk hype machine, fueled by the fanboys at Futurism and other tech sites,

The generation gap cannot be more apparent than in Technology. Today we will explore that gap with our two in-studio guests, Jefferson White and Nick Ressler. Baby Boomer vs. Generation Z Jefferson is a recent graduate of Legacy High School in Bismarck...

Breaking Away From Traditional Energy

This show is particularly charged with information and will introduce many of our listeners to a field of expertise we probably rarely, if ever, think about. We also consult with the investigation hotline to make sure that the business is legal.

Autonomous vehicles are rolling towards us at an amazing rate.  Even autonomous flying cars will be fluttering in our skies in just a few years.  With that said, you don’t have to wait to start using autonomous technology.  On today’s show,

Do reviews influence how you purchase items online, check in at a hotel or eat at a restaurant? Even tho there are sites that sell incredible good products online like Oddbins, We will chat about how reviews can influence us and the impact they can hav...

Have you ever wondered how social media companies like Facebook make money? Today, the Guru of Geek Marlo Anderson and Tech Geezer Jim Walsh discuss why people should be concerned about the data found in your social media accounts. Steve Wozniak,

Another Data Breach Segment 1 The date industry is a big industry. New apps are introduced every day as a means to make life easier. Each time you download a new app, the chances of giving permission to use your personal data is extremely high.

Jobs of the Future

Early 2018 statistics show there are about 6.5 million available jobs in the U.S. There are plenty of jobs available. How prepared people are to take these jobs? It doesn’t matter how well you do your current job,

Making a phone call with Alexa has become a big deal. Spectre and Meltdown finally have a patch to repair vulnerabilities of the malicious software. A burger-flipping robot named Flippy has set up shop in Pasadena, California. Time for Tech Talk!