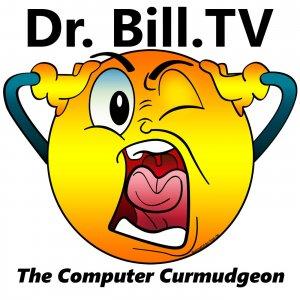 Dr. Bill gripes about a few things involving the Evil Empire… Microsoft! He also discusses his new microphone, Cloudlifter, and shows some video from 1987 from CIBA-Geigy while he was working on a Digital VAX 8650! – Check out the Dr. Bill.

Dr. Bill shows us the Canon EOS WebCam Utility Beta utility that transforms your Canon DSLR into a webcam over your USB port! – Check out the Dr. Bill.TV Blog at: https://www.drbill.tv Links that pertain to this Netcast: TechPodcasts Network Internatio...

Dr. Bill discusses the new web site for USTVGO, Jitsi, an Open Source alternative to Zoom conferencing, and a free webcam app in YOUR phone’s appstore called iVCam that allows anyone with a smartphone to connect it to a PC to do a web conference.

Dr. Bill fusses and gripes about YOUR web conferencing techniques! And, he gives you hints and tips on using your equipment to look more professional on a video conference. Links that pertain to this Netcast: TechPodcasts Network International Associat...

Dr. Bill rejoices at getting various pieces o’ tech to work on the show this week, talks about a cool “Deep Fake” on YouTube, plus, a guy that built a DIY Desktop PC from an old laptop, Manjaro Linux 19.0, and what software he always installs on Linux!...

Dr. Bill looks at life after Windows 7, which is no longer supported by Microsoft. His solution? Zorin OS! A demo of Zorin and how it can solve your lack of Windows 7! Links that pertain to this Netcast: TechPodcasts Network International Association o...

Dr. Bill briefly discusses a video posted on his Blog about the future, it will be here before you know it! 5G in central North Carolina through T-Mobile, will future iPhones and other smartphones have ANY ports?

A quick update on the FCC required ‘re-pack’ of TV station frequencies, if you have cut the cord, you really SHOULD re-scan your local OTA (Over-the-Air) channels NOW! Links that pertain to this Netcast: TechPodcasts Network International Association o...

Frustrating Voicemail Scam, Google’s control of search, the case for the DuckDuckGo Search Engine, use Social Media, don’t let it use YOU! Google’s search AI algorithm can cause problems, is Google “shaping” what is considered ‘fair’ on-line?

Dr. Bill hasn’t had a show in a while, so we join him as he rants a bit about several things, and waxes a bit nostalgic as well. Links that pertain to this Netcast: TechPodcasts Network International Association of Internet Broadcasters Blubrry Network...

Dr. Bill shows off his new toy, the ClearClick HDMI Recorder box! Recording the show with it, as he discusses it! Check out this quick, impromptu edition of the show! Links that pertain to this Netcast: TechPodcasts Network International Association of...

Dr. Bill gives us ten things we can do to stay safe on the Internet and on-line this Holiday Season! Our sponsor this week is IPVanish VPN, your best way to stay safe on-line! Go to www.DrBill.TV/VPN to get a great discount!

Windows file sharing (SMB) comes to Chromebooks, due to all the user uproar and complaints Google has decided to restore ‘www,’ Microsoft has reversed course on a Windows 10 warning, GSotW: Comodo One Remote Access and Control, GSotW Extra: AeroAdmin!

Our LONGEST Dr. Bill.TV Show EVER! Broken up into Bite-sized pieces for you! APTeK HD Video Capture Device Unboxing and Discussion – at 2:23, New Email Scam Overview (Security) – at 13:02, Geek Project of the Week: Linux on Your Chromebook – at 31:08,

Dr. Bill discusses recent issues with VLC, and how it led the GSotW: POT Player! Also VLC is back! Then, is your phone spying? A demo of Popcorn Time, Yahoo! kills its chat app, a box produces water! Microsoft buys GitHub!

Dr. Bill takes a brief time out of his normal netcast schedule to rant about the publicity around the Facebook data issue. There is NO expectation of privacy on Facebook! Come on, guys! Links that pertain to this Netcast: TechPodcasts Network Internati...

World Backup Day, Cloudberry 50% Off! SUSE Enterprise Linux on Raspberry Pi, Under Armour MyFitnessPal hit by data breach, GSotW: JetBoost, SpaceX starts a ubiquitous WiFi project, demo of the Roav VIVA Alexa for your car device (at 20:46 into the show...

YouTubeTV, multiple Amazon Dots, Combining multiple OTA antennas, GSotW: TeaTV, Philo, NoCable.org, Microsoft Edge can be pwned! SlingTV and, be sure to tune in at approximately 29 minutes in for the ‘Marvel Movie after the credits’ scene on Leonflix!