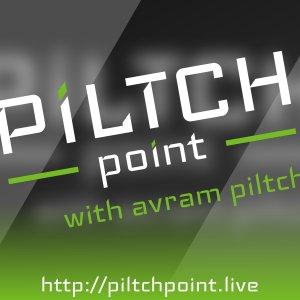 Hosted by Avram Piltch, Editor-in-Chief of Tom's Hardware, and moderated by Scott Ertz, The Piltch Point is a livecast covering news, reviews, and previews of devices and components.

In the last few months, we've seen a significant improvement in generative AI. This technology allows a user to enter a prompt to create media. The output has generally been text and images, but audio

What to Look for When Setting Up Multiple Monitors - Episode 302

The most important and often most underrated aspect of your computer setup is your monitor or ideally monitors. That's the aspect that you're looking at all day long, so if you can get a better monito

Do you need more USB ports? Are your devices constantly running out of power? If so, you need a USB hub! There are many different types of USB hubs available, but not all of them are created equal. Av

You can have an interesting week based entirely on finding good deals. We've been in "Black Friday" season for a while, but Wednesday and Thursday are going to be the real beginning of the process.So,

One of the most significant issues that computer users encounter is a lack of storage. Whether that be because you're using a laptop that only came with a 256 GB drive, or you're a content creator tha

It is an exciting time to be building a new PC. AMD's new Ryzen 7000 series processors are out, and Intel has released the new Raptor Lake processors, now known as the 13th Generation Core Processors,

In June, Avram gave us a look at what components you could put into a gaming PC for under $500. The build was decent, and even inspired the build available at STRYKE eSports and Gaming Center. Since t

This week, Avram Piltch discusses some of the best choices for what to look for on Prime Early Access Sales and on other sites.

What PC Components You Should Buy Now - Episode 295

Right now is both the best of times and the worst of times for building a new PC or upgrading an existing one. If you absolutely need to build or upgrade one today, then there is no time better, of co

As surprising as this might be after the past few years, it is a great time to buy a new PC. The new chips and video cards will be coming out later this year, but if you don't need to be on the bleedi

How to Secure Wipe a Hard Drive and SSD - Episode 293

When you are done with an older computer, there are lots of great ways to properly upcycle it. Organizations across the country will take donations of older computers that can be cleaned up and provid

Improve Your Computer Life for Under $50 - Episode 292

When it comes to interacting with your computer, we know that the way your items come is not always the best way to use them. Avram has some great ideas on how to improve your experience. Best of all,

For some products, an annual refresh is expected. One of those products is Lenovo's workhorse productivity laptop, the ThinkPad X1 Carbon. This year marks the 10th generation of the laptop, and the co

How to Get Windows Cheap Without Restrictions - Episode 290

When building a new computer, installing Windows can be a big challenge. You could be hampered by not owning a copy of the operating system yourself, or it could be because you have specific needs for

Over the past year or so, building a PC has not necessarily been easy. This has been in part because of the higher cost of components, but mostly because of the limited availability of graphics cards.

If you're just starting out online, one of the first things you'll need to do is choose a web host. This can be a daunting task, especially if you don't know what to look for. Avram discusses the diff

Throughout the year, those of us in the tech space have the opportunity to see, touch, and test some of the most interesting new products. Much of the time, these products are exciting but iterative.

For many of us, it's been a while since we've traveled or needed any tools for working not from home. However, things are getting back to normal in large parts of the country and the world, meaning th

As the conflict in Ukraine heats up, one of the possible problems that arise is whether or not Russian software can be trusted. In particular, can we trust the security product Kaspersky? The German g

Over the past 2 years, certain products have been difficult to find. For a while, laptops and other electronics were in short supply. This came about because lockdowns stopped production but increased

Getting ahold of computer components has been a challenge for the past few years. To increase your gaming experience, you can't get a video card unless you're prepared to buy from a scalper. But, you

One of Avram's favorite sayings is, "We're in the business of interesting, not good." This is an important distinction that makes his view of the tech journalism industry far more fun. Often times we

For some of us, procrastination is a way of life. A lot of times, we can manage to pull out a win in the end, like working all night before a presentation. However, when it comes to getting a gift dur

It's the end of the year, and that means that it's time to look back on the last 12 very strange months and see what positives we can pull out with Tom's Hardware's Best of 2021.Best CPUWhile AMD has

We know that the supply chain issues have made all sorts of products hard to come by, at this point ranging from cards and trucks to food and drink. The product category that has been the hardest hit,

It's that time of year - Black Friday season. While Black Friday used to be the day after Thanksgiving, in recent years it has expanded into a whole season. Starting this week through the next few wee

The past 18 months have added a new piece to our daily lives: face masks. Whether you are excited about wearing them or annoyed by their existence, the reality is that they are here and likely here to

While it may be November, the impact of Techtober 2021 is still in full swing. This week, Tom's Hardware published its Alder Lake processor reviews, specifically the 12th Generation Core i5 12600K and

Over the past few weeks, there has been a bit of a roller coaster over at Raspberry Pi. Most recently, last week the organization announced that Raspberry Pi 4 boards would be going up in price by $10

NVIDIA GeForce Now is a cloud game streaming service that launched in 2015 as a beta, and finally went public in 2020. The service is unlike others in the industry. Rather than essentially renting a g

This week has been a big part of what we're calling Techtober. New product announcements were made by both Apple and Google, plus an exciting new partnership from Raspberry Pi.Apple MacBook ProApple a

Since Microsoft officially took the wraps off of Windows 11 earlier this year, the response has been mixed. The most divisive aspect of the new interface is the massively changed Start Menu. In the pa

The Lenovo ThinkPad X1 Carbon is famously Avram's favorite laptop and the one that he owns personally. This week, we're getting a closer look at the newest version of the laptop - the 9th Generation.T

One of the tasks that many computer users want to do is share the content on their screens. This can be for a presentation, to create a tutorial video, or simply to save something that is not easily s

With the upcoming Windows 11, Microsoft is introducing a lot of new features, as well as updated interfaces for long-time aspects of the operating system. While some updates are receiving praise, like

How to Make Your Number Pad Useful - Episode 265

If you are using a laptop, you likely do not have a number pad on the right side of your keyboard. However, most standard keyboards have it, despite many people not using the section at all. Sure, acc

It's been a while since Avram brought us a new laptop, and this week we have the 6th generation of the Lenovo ThinkPad X1 Yoga. The Yoga family is known for its bend-backward design, allowing you to c

With any new version of Windows comes an updated UI. Windows 11 has introduced some of the biggest UI changes since Windows 95 (with Windows 8 set aside since Windows 10 undid almost all of that parad

Recently, Tom's Hardware has begun covering 3D printers. As such, Avram has been doing a deep dive into the world of 3D printers and what it takes to use them effectively. What he has learned is that

This week, Avram Piltch talks about the newly announced Windows 11 (Sun Valley), the new features, and the confusion around the release.

If you use a computer, you've experienced some sort of a crash. Even Apple, despite its marketing, experiences hardware failures, software conflicts, or driver issues. But, there's a very famous and p

If you follow the cryptocurrency world, you've likely encountered Chia - the new currency that works differently from all the others. Normally, coins are mined through a process called "proof of work.

Tom's Hardware was founded 25 years ago and made a major impact on the internet. In the years since the first article was published, a lot of things have changed in the computer industry, while other

In January, Avram introduced us to the new Alienware m15 and m17 R4. This gaming laptop is considered to be the best performing laptop for gaming on the market today. But, like almost all gaming lapto

As the global chip shortage continues to affect product availability, finding certain technology products is getting more difficult. Whether you are looking for a new Radeon RX 6900 XT videocard or an

This month marks the 1 year anniversary of "15 days to slow the spread" and it has brought with it a number of new challenges. For many people, it was the first experience of working from home instead

In April 2012, Avram's son was born. This got him thinking about what technology and related industries we were using at the moment that his son would never use, or would never be a part of his normal